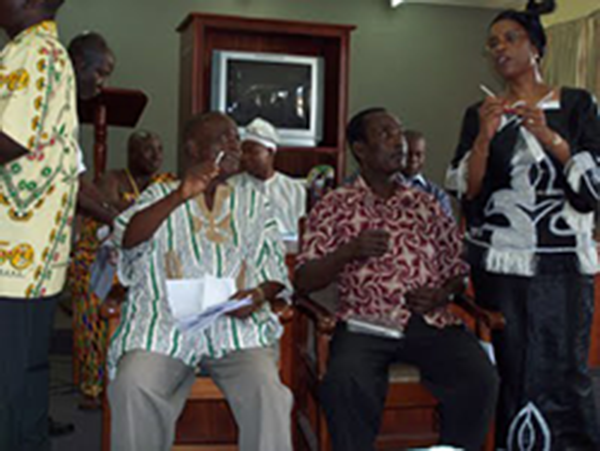 There are lots of questions about when to take a DNA test. We suggest that you conduct as much of the traditional genealogy research as possible before taking the DNA test. Why? Well, we have already established that African DNA is severely underrepresented in all DNA databases--regardless of who owns the company and what they claim they can uncover for you. The truth is: until we start getting more people of African descent to participate in these analysis, the process of answering those long unanswered questions will linger into future generations and this is why we have taken the steps to collect the samples from our African relatives so that when you do decide to take the test, there are meaningful samples from which to compare your results and hopefully, a match! In the meantime, for those companies that are owned by pharmaceutical companies or are just out for profit to "sell dreams" to Africans in the Diaspora, the one way you can guard against fraudulent or inaccurate results is to know a little bit about where your families groins are based up the written records.

For example, if you take a test with a company that says they specialize in African DNA and they tell you that your results are from Guinea Bissau. How do you know if those results align with your own family history? You have to know where your family history started in the US. Let's say, for the sake of argument that your maternal family origins are in North Carolina by way of South Carolina. You know the name of the slave owner from the records you have gathered and you know that your maternal great-great-great grandmother was first born in Africa. One way to confirm or deny the DNA findings is to research the ship manifest that arrived in South Carolina near the date your maternal great-great-great grandmother arrived. If there were no ships from Guinea Bissau, then you should either reassess your DNA results or your research.

That is not to say that the results are inaccurate it just means that we have to consider all options until we can build a database with enough comparable samples to remove many of these questions. For example: if you have one company that tells you that your results are consistent with three geographic regions that might cause some confusion but remember: wars and genocide have forced migrations all over the continent. Slavery was a forced migration. In other cases, people who are living or identifying themselves as Yoruba might actually be Bantu and not even know it, so we have to factor that into the equation as well in terms of the results we get from Africa. However, there should still be some consistencies in what the official records and oral history of your family (wherever it exists) indicate and what the DNA has shown.

When you have exhausted every reasonable means to rediscover your family history, then take the test. Let’s face it: many of our records were either never recorded or destroyed by fire and the Civil War and DNA may be the only clue to help us retrace the footsteps of our ancestors.

Finally, many of us has at least one person on our family tree that had been adopted. Adoption can be legitimate in the sense that strangers who wanted to be parents adopted a child or more sinister in that a child may have been “adopted” to cover the secrets of an ancestor who had a child outside of a marriage. If the adoption was legitimate, then DNA should be the first option under those circumstances. It is possible that your ancestor’s history in Africa was recorded and by reconnecting with that distant cousin, you might be able to re-trace the footsteps of the biological family in the US. It is the forward looking backwards approach.

In the end, you should perform due diligence on which company to use to analyze your results. The company should not be a subsidiary of a pharmaceutical company and should have results that are easily transferable to another DNA company should you want a second opinion. We have chosen FamilyTree DNA because they have the best record for accuracy and privacy. Their kits are affordable and they provide additional genealogy tools to help you track down your genetic match should you have one.

In the end, the decision to go forward with finding your genetic cousins is yours. It is an exciting time for us: the technology that is used to recreate the family torn apart by slavery is compelling and for those of us who understand the implications of finally putting to rest the single largest silent surviving legacy of slavery: the destruction of the African family, is historical and emotional and very, very real.