Architecture. Below are just a few samples of the hidden characteristics that over time have become identified by other cultures as their own. See any similiarities?

Circumcision. What started out as a hygenic ritual for elite classes in Ancient Egypt 4,000 years ago has transformed into a religious requirement in orthodox Hebrew, Islamic and Christian faiths. 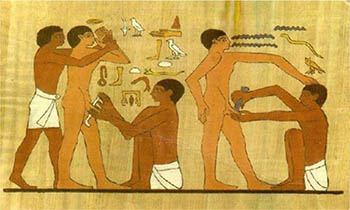 Soul Food.Soul Food is not what we have come to know it to be today. We think of soul food as a Southern cuisine mixed with some Creole seasonings but it is not. Bear in mind that Africans were not just enslaved in their persons but also in their diets and much of what they ate was left over from what their abductors did not want: things like livers, neckbones, fatback, and chitlins. Their diets were high in sugar and fat (TRANSLATION: diabetes, high blood pressure, high cholesterol). That was the only way they could get any protein because meat was not a part of their normal diet unless, of course, it was Christmas and only after their abductors ate what they wanted. These are the types of foods that have become known as soul food. Authentic soul food are rooted plants and fruits such as watermelon, bananas, okra, corn maize, yams, greens, black-eyed peas, and so on. These foods, in particular, were not native to the United States.

Like many other countries where things like plantains, yams, sweet potatoes, rice, cassava, corn maize, lima beans, BBQ, hot peppers and spices like curry and cumin have become "native" to those populations, they were transported with the kidnapped Africans. The colonizers reasoned that if they allowed Africans to have some comfort foods, things that made them feel not so far away from home, that it would prevent the enslaved from trying to run away. After all, they spent a lot of money finding the right slaves to suit their purposes and runaways (Maroons) or dead Africans was a financial loss and therefore detrimental to their business, so they tried to find ways to make it “easier” to be a slave and not miss home so much.

When we think of certain types of foods, we associate it with other ethnicities rather than our own. For example, when we think of chili peppers, bananas and sugar cane, we might think of Hispanic people; rice might make us think of Asians; BBQ makes us think of the South; corn maize makes us think of American Indians. Gumbo and Jambalaya specifically makes us think of “Creoles” in New Orleans; fried chicken, macaroni and cheese, sweet potatoes, grits, corn bread makes us think of “soul food” in the American south. These associations are not necessarily misplaced in that these groups might have made these foods a significant part of their cultural heritage over time but it is misplaced to think that these foods had origins in any place other than Africa. Moreover, their distribution throughout the Diaspora is a testament to vast and widespread presence of Africans in industrialized nations.

All around us are traditions of our African ancestors that we have incorporated into our everyday lives without knowing that while our names and places of origins might be lost, the influence of our ancestor’s remain hidden in plain view.